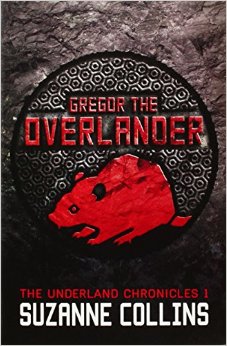 Today I’ll be reviewing Gregor the Overlander, the first book in a five-part series called The Underland Chronicles. It was written by Suzanne Collins (author of The Hunger Games) and published on September 1, 2003. The book takes place in a mystical world beneath ours called the Underland, filled with giant rodents, bats, spiders, and roaches, among other things. Along with the animals, there are also pale-skinned humans that make up key characters in the saga. This review will contain no story spoilers.

Gregor manages to be an intriguing character while still having the expected traits of an 11 year old boy. While we are given a somewhat interesting personality at the beginning, his true traits come to light towards the middle where the real drama starts. He is shown to care for his family more than his new Underland companions, understandably, but there are times where he must make a decision that could affect one positively and one negatively. It creates fascinating story arches that I find very exciting.

Boots, Gregor’s baby sister, is another fun character. As a young girl, she uniquely mispronounces Gregor’s name, and as the saga progresses, she pronounces it better and better. Boots herself is charming and even quite funny at times, mainly when she is with the humanoid cockroaches of the story.

Other characters such as Vikus and Solovet were, while crucial to the plot, not very interesting in terms of personality. This may not seem like a big problem for many, considering that they are older, wiser characters, but in almost every scene with them, intense or not, I never felt fully connected with them as I had with many other characters. Their dialogue, especially that of Solovet, was dull at times. I will say that in the later books to come, Vikus’ dialogue contains some very memorable quotes; Solovet takes on an even bigger role in the books to come, but her dialogue is still bland to me. Other characters such as Luxa, Henry, and Mareth join Gregor in the fight, and out of the three I just mentioned, Luxa is still the most memorable to me. But that’s not to say Mareth and Henry weren’t equally fascinating.

The final character I will mention is Ares, one of the many anthropomorphic animals in the story. He is a huge bat. Ares is less of a main character and has more of a supporting role throughout the first two-thirds of the book, until a plot twist occurs that brings him further into the main story. Suzanne Collins did an excellent job of almost hiding this character from the spotlight until this twist came, while still having us remember him. Ares is, by far, my favorite character, simply because of the turns and twists that were achieved to bring him into the main plot.

As I said, no spoilers will be discussed, only the core construction and quality itself. On that note, the plot of Gregor the Overlander starts off simple and interesting. Gregor, after witnessing his baby sister fall down a hole beneath a washing machine, goes in after her, and it leads them to the Underland. While it does confuse me that there is an Overland entrance to the Underland, and underneath a washing machine for that matter, the plot is a joy to read, and the strength of the previously mentioned characters only adds to it.

One issue with the plot, however, is the amount of exposition. Exposition is good in well-timed segments that don’t drag away from the main plot too much. And the less obvious the exposition is, the better. Luckily, the exposition in Gregor the Overlander does not take away very much of the excitement. While it fills out the criteria for not dragging away too much from the plot, the subtlety isn’t the best, and it can smear the moment up a bit in many instances. When exposition isn’t shown, however, the somberness, intensity, or humor really shines, and Suzanne Collins did a brilliant job of adding one of my favorite types of story arches: betrayal. I won’t spoil it, but the impact it has and how it makes you feel is almost completely unparalleled to other books’ examples of it.

Gregor the Overlander is a stellar book about war, betrayal, and love. While some characters may not shine as much as others and exposition may be handled incorrectly in certain instances, the great impacts many of the events give off, the presence of interesting, shifting personalities, and the overall deep plot make this book well-deserving of this 9/10. After reading this book, I highly suggest that you continue with the other four books in the thrilling Underland Chronicles.